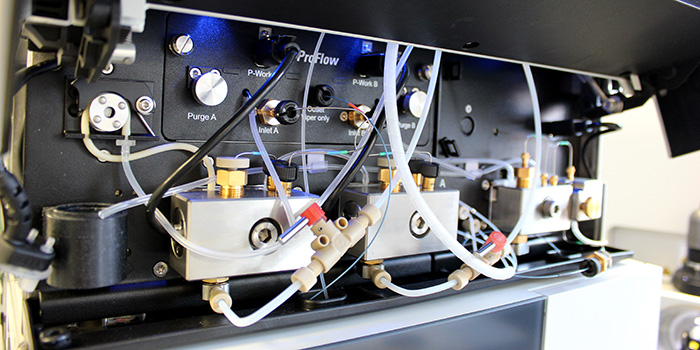 Overview
High performance (or high pressure) liquid chromatography is a step up from standard LC or FPLC but functions in a similar manner. Chemically-functionalised beads are packed into a column and these bind molecules, and a liquid is pumped through the column to elute absorbed components.

HPLC is different from standard LC in that the beads are smaller and more regular. They pack more tightly into the column and require higher pressures to force the liquid flow through the column.

Because beads are more regular, the performance of the column is much improved and this allows high resolution separation of chemicals or biomolecules that have very similar properties.

Eluted substances can be detected by a range of different detectors, the most common being UV absorbance, but mass spectrometry is also widely used.

Columns packed with beads functionalised in different ways are available to allow selective binding of chemicals with a range of different properties.
Technical Detail
HPLC uses columns packed with beads sizes that are typically from 3 microns upwards. This gives rise to operating pressures across the column of up to 3000 psi, which is required to pump the mobile phase through the column.

Size exclusion columns, which separate molecules according to size, are also available for HPLC.

Typically a UV detector at either 280nm or 214nm is used to detect compounds that elute.
Works well for...
HPLC works well for separation of mixtures of compounds that are either relatively simple - up to 10 components - as well as those containing many hundreds, or even thousands of components. When mixtures of compounds are highly complex then mutliple sequential chromatographic separations under different conditions may be required.

In general, HPLC works well for molecules that are at least partly hydrophobic and molecules with a high degree of hydrophilicity tend not to be retained on HPLC columns. Hence inorganic compounds are not typically amenable.

HPLC can be used, for instance, for separation of mixtures of pesticides, pharmaceutical preparations, metabolites from blood/plasma, peptides and many other things.
Sample requirements

Because HPLC is a solution-phase technique, analytes need to be either in solution or capable of being solubilised by one of the compatible solvents, such as water, methanol, acetonitrile or similar organic solvents.

Particulates must be removed from solutions prior to introducing them to HPLC columns.

Although HPLC systems that operate at large preparative scale exist, JBL Science operate instruments at semi-preparative scale and lower, hence < 10mg of sample is optimal and analytes present at levels as low as pg or even fg levels can be detected.